Have you ever had the privilege of trying out an RCA Tablet with keyboard? If not, you would be surprised to know how functional it can be, especially as a note-taking device. Being one of the budget tablet manufacturers, RCA deals in little nifty 2-in-1 tablets with detachable keyboards. While it has a bunch of options to choose from, I opted for the RCA 11 Delta Pro.

The 11 Delta Pro is targeted at first-time tablet users. Starting from editing notes to scribbling to handling basic documentation, this 2-in-1 device has everything essential in place. You can use it as a secondary on-the-go device or consider gifting it to your not-so-tech-savvy parents or relatives. In either case, the 11.6-inch RCA tablet packs quite a punch.

But why should you or anyone consider investing in the RCA 11 Delta Pro? Well, it is a great and handy tablet for reading articles, homeschooling kids, and taking notes. Plus, it has enough firepower to support a decent bit of multitasking. Let’s get a true measure of the RCA 11.6 2-in-1 tablet as I dissect it in detail in the subsequent sections.

Despite not offering the best-in-class specifications, the Delta Pro takes productivity to a new level, courtesy of the convertible design, display, and hardware-specific components. I shall now review every aspect and characteristic associated with the Delta Pro based on my personal experience with this senior-friendly tablet.

To illustrate the same, let’s go over the RCA 11 Delta Pro specs first: 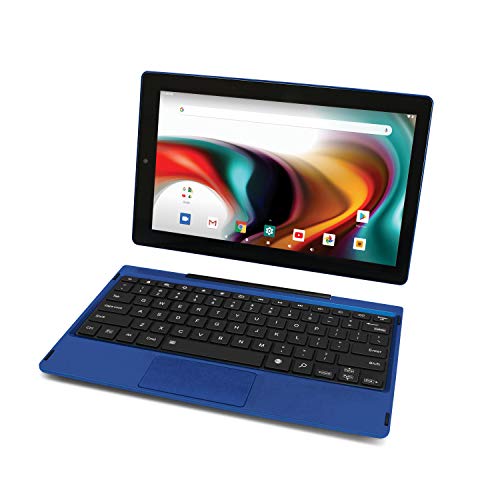 Now that the specifications are out of the way, let us delve deeper, taking one aspect at a time.

Made of hardened plastic, the Delta Pro isn’t the most aesthetically pleasing Android tablet around. The back panel is matte plastic, and the overall structure hinges on a seemingly durable hinge. Quite ironical, isn’t it?

Still, the magnetic hinge is a great resource and allows you to pair the bundled RCA keyboard with the tablet. As far as the connectivity is concerned, it is replete with ports and buttons on the left side — including a headphone jack, standard USB connector, micro-USB charging port, standard 5V jack, and the all-important power tab.

On the right side, RCA 11.6 2 in 1 tablet has a charging indicator, volume rockers, and a built-in microphone. The RCA keyboard case is ergonomic and sleek. And it connects rather seamlessly to the tablet. Overall, the device feels, looks, and boasts plastic.

The saving grace here is the metallic undertones associated with the keyboard, a robust hinge, and a rather compelling coupling mechanism to convert it into a 2-in-1. As far as the dimensions are concerned, this tablet measures 11.81 x 7.28 x 0.43 inches. And it weighs close to 1.80 pounds, making it a manageable 11-inch tablet, without the tablet, obviously.

And if you are just in it for the keyboard, the size, feedback, and overall typing performance are better than what I expected. The experience is quite similar as you get on the premium tablets for writing. There are helpful shortcut buttons for playback control, volume, and brightness. Still, the trackpad needs fixing as it’s stiff despite the great responsiveness.

RCA ensures that the Delta Pro is relatively bright with an 11.6-inch screen in play. Plus, it exhibits an overall display of 1366 x 768 pixels. The saving grace is the IPS panel that boasts excellent viewing angles. The 300+ nits of peak brightness isn’t a head-turner but managers to do all right. Also, there are thicker bezels in play followed by decent viewing angles.

When it comes to the overall functionality, the tablet display is good enough for reading documents, even outdoors, and playing some basic card-based games. However, watching movies in 1080p or using the same for designing isn’t the best option, courtesy of the subpar color accuracy.

As far as the speaker setup is concerned, there is a standard grill on the rear—boasting decent loudness and acceptable audio clarity.

Here comes the fun part with the 11.6 RCA tablet, making room for a reliable quad-core SoC. The featured processor manages to clock at 1.3GHz. Adding to the hardware setup is 2GB RAM, which works fine for reading, movie watching, note-taking, and copywriting. However, it won’t be a suitable tablet choice for gaming, video editing, and other intensive tasks.

As far as the storage support is concerned, there is 32GB of built-in space. You can even upgrade the same by 128GB via the microSD slot. Also, it runs on dated Android 9.0 OS, and hence booting is slow — which is on the expected lines.

The Delta Pro is a budget RCA tablet with a detachable keyboard. So no camera-specific surprises. Still, you can live by with the 2MP front and a 2MP back shooter. The video capturing resolution is subpar, with RCA supporting HD recording. Plus, a standard microphone in play keeps the audio requirements in line with expectations.

RCA comes equipped with a standard battery, offering close to six hours of extended backup. Also, once the battery drains out, you can recharge the same fully within 2 to 2.5 hours. Yes, the tablet misses out on fast charging but wasn’t it expected for the given price.

The Delta Pro features a dual-band wireless AC standard, allowing you to establish internet connections with ease. The Bluetooth 4.1 lends wireless support and ensures that you can easily connect headphones and other devices. As far as the wired connectivity suite is concerned, you get a standard USB port and a 3.5mm jack in play.

7. OS Experience and other Features

Finally, we’ve reached the last aspect of the RCA 11.6 tablet review. The stock Android OS is responsive enough. Yes, it boots up more slowly than expected but allows you to customize the device via a set of predefined controls.

Overall, if you are willing to open only two or fewer apps at once, the processing speeds and the OS performances might not attract a lot of flak. And even though you get a bit of bloatware, the lag and latency aren’t way too evident, provided you know how to use the same.

Now that you are familiar with the diverse aspects of this RCA Android tablet with keyboard, let us quickly delve into the hits and misses:

Is RCA a good tablet brand?

If budget-friendliness is one of your priorities, RCA is a good tablet brand. And RCA tablets with keyboards, despite being inexpensive, ensure proper coverage of valuable specifications.

How do I turn on the keyboard on my RCA tablet?

The detachable keyboard associated with the RCA tablet doesn’t require proper ‘turning on’. Instead, you simply need to couple it using the magnetic connector on the tablet, and you can start working on it instantly.

What can you do on an RCA tablet with a keyboard?

You can use the RCA tablet with a detachable keyboard for document editing, attending lectures, viewing and responding to emails, and other non-demanding tasks.

Can I upgrade the Android version on my RCA tablet?

Yes, you can upgrade the android OS to the subsequent version, depending on how far RCA lets you go. You simply need to head over to the ‘update option within ‘Settings’ and leave the rest to the tablet.

There are many RCA tablets with keyboards available in the market. But the 11 Delta Pro comes across as one of the more affordable and practical choices. Despite being available at a low price, RCA doesn’t let go of functionality. It makes room for several dependable features — allowing you to use the device as a standard secondary laptop.

Suggested Read: How to Reset an RCA Tablet?

Joseph, despite spending the majority of his professional career in the US, has been well-versed with tablets and smartphones launched across the globe. As a part of the TabletChief copywriting team, Joseph ensures that every new tablet is reviewed in the most detailed manner. Plus, he believes in explaining each complex tablet-related concept with ease, especially for individuals who avoid heavy, technical jargon.